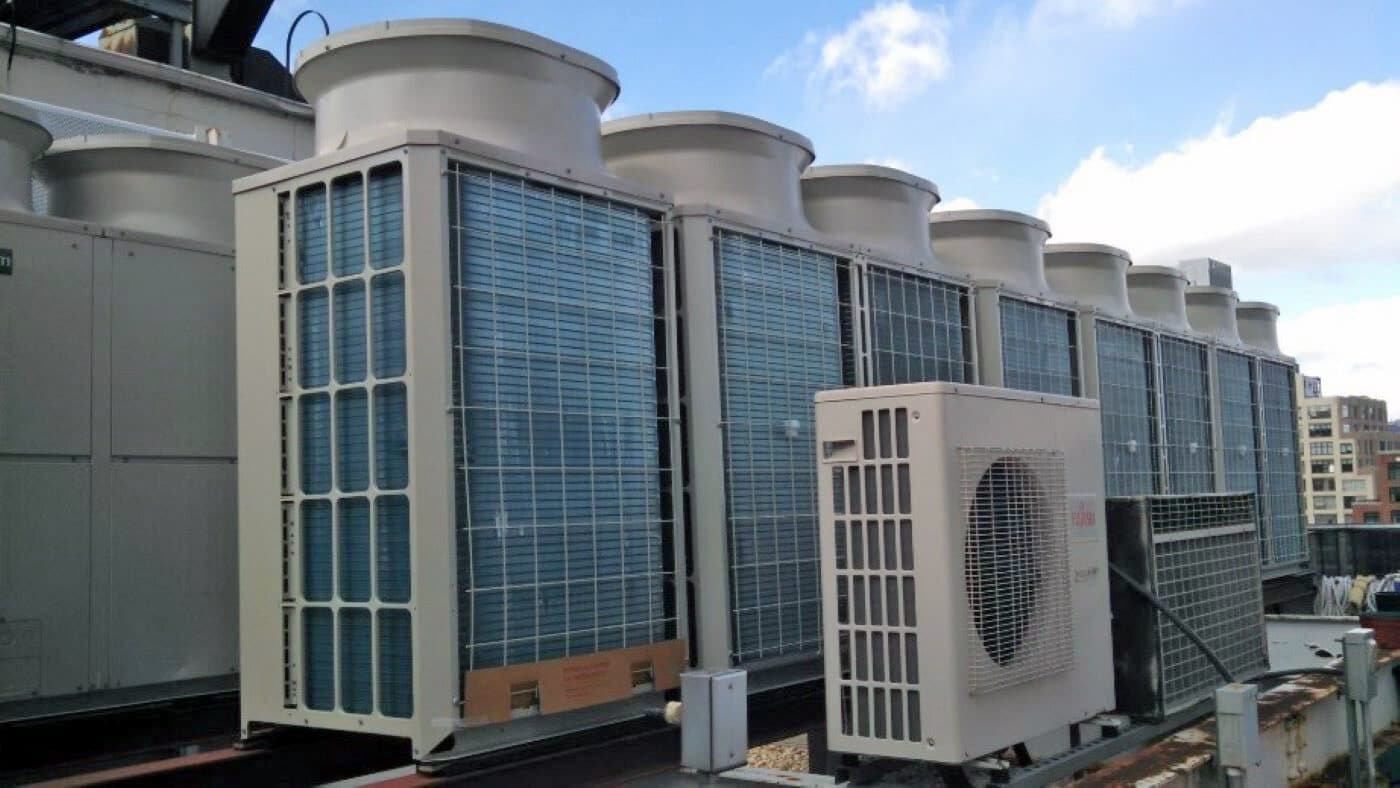 A VRF system typically refers to an outdoor single-condensing unit serving several indoor head units. The compressors can change speed to meet different loads, which increases energy efficiency. Additionally, some VRF systems allow for a building to heat and cool at the same time. Rooms requiring heat will essentially transfer that heat from a room that requires cooling, which dramatically improves efficiency.

A VRF system performs efficiently due to inverter compressors, which allow the compressor to adjust to heating and cooling needs instead of running continuously like a non-invertor system. The VRF system also does not require duct work, as the refrigerant passes through the condenser units to indoor units. The lack of ductwork can further increase the energy efficiency of VRF systems.

With high efficiency comes the drawback of cost. VRF systems are often expensive to install, and the associated utility bills are challenging to track. Typically, each apartment has an electric meter administered by the utility company. The meter tracks the individual unit’s electricity use for HVAC. However, VRF systems have multiple head units with a single condensing unit, which requires sub-meters. Utility sub-metering is a system that allows a landlord to bill tenants directly for individual measured utility usage. According to the Board of Public Utilities, submetering is not allowed for natural gas and electricity, except for existing submetering systems. Therefore, sub-metering in New Jersey is not permitted for new high-rise apartment buildings. This law poses significant challenges for VRF systems, as landlords cannot utilize the sub-meter data and must charge flat fees instead of usage-based rates by utility companies.

Ephoca’s AIO wall-mounted units are compact and easy to install. The packaged units eliminate the need for outdoor condensing units, which is ideal for buildings in high-density areas without access to outdoor or ample roof space. The AIO Wall Mounted units also offer the option of an Energy Recovery Ventilator (ERV). ERVs save energy by capturing some of the heat from the conditioned exhaust to preheat or cool the entering outside air.

While Ephoca’s systems are not as efficient as a VRF system, they are substantially more efficient than a standard packaged terminal air conditioner (PTAC Unit).  Like VRF systems, the Ephoca units use variable-speed inverter compressors, making them more energy efficient than the compressors used for conventional PTAC Units.

While more cost-efficient than a VRF system, the Ephoca units are still more expensive than a traditional PTAC unit.  Additionally, the Ephoca units are a newer and less proven system. Since the system has not been installed as frequently as PTAC Units or VRF systems, there is less available data on the lifespan of the system and potential maintenance issues. Developers may be less inclined to choose this system as a result.

Friedrich’s VRP system is a single packaged unit that utilizes an Inverter compressor to improve energy efficiency and reduce sound. As with the Ephoca and VRF units, the VRP Inverter compressor runs more consistently with controlled speeds, requiring less energy.

The Friedrich VRP system is similar in shape to the commonly installed MagicPak system. However, a VRP system is more energy efficient. The VRP system can serve more than one room once connected to ductwork, enabling one system to service a two-bedroom apartment that would typically require two PTAC Units. With more systems historically installed than the AIO wall-mounted units, the energy efficiency and performance data of the VRP system are easily accessible, giving developers more peace of mind when selecting this system.

The VRP system is a sizeable system that developers frequently hide for aesthetic purposes. Less sleek and compact than other systems, developers typically build a closet around the VRP system, which can reduce living space.